The Pennsylvania chapter of the American Institute of Architects (AIA) as well as AIA Pittsburgh have each recognized evolveEA’s work in Upper Lawrenceville, or the Tenth Ward, with Honor Awards in Regional and Urban Design. The Upper Lawrenceville Targeted Development Strategy was developed through a series of charrettes led by evolveEA in which we helped the community craft a neighborhood identity and a series of principles guiding future development to achieve the community’s long-term livability goals. The principles built upon the existing physical and cultural legacy of Upper Lawrenceville but also were aspirational, seeding a vision for a future yet to come focused on economic, cultural and environmental issues.

AIA Pittsburgh held its annual awards gala on October 23rd in Pittsburgh and the AIA Pennsylvania Celebration of Architectural Excellence Awards Gala was held at the world-renowned BARNES Foundation in Philadelphia on November 12. Christine Mondor, AIA, evolveEA’s principal for the project, said, “The Upper Lawrenceville plan strongly emphasized growth from a sense of place and culture that is unique to the 10th Ward and to Pittsburgh. We are honored that two national juries recognized the validity of this approach.”
Many Lawrenceville residents participated in the community workshops, and some were inspired to action almost immediately. A new fresh food access and marketing initiative, and a handful of local businesses and beautification projects launched by residents point to the sense of pride that has driven community activation in the year since the visioning process was completed. There has also been significant development activity at some of the sites identified in the plan as neighborhood anchors, and a sharp increase in building permits and renovation activity throughout Upper Lawrenceville, with home renovations and sales rising steadily, indicate promising trends guided by the community’s creation of the Development Strategy. 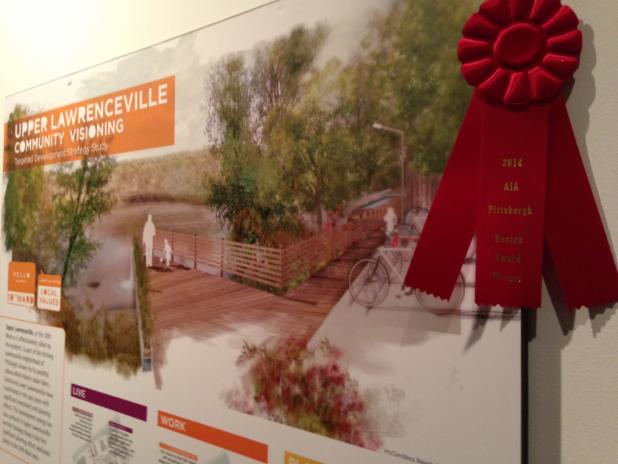 Together with our sister organization, Lawrenceville United, we’re very proud to count evolveEA and the Design Center as partners in creating the Upper Lawrenceville Community Visioning Plan. It was a remarkable planning process, bringing together a broad and dynamic swath of community stakeholders. The process yielded a powerful and utilitarian vision for the neighborhood. The report has already served as a roadmap, enabling us to create demonstrable progress in our shared pursuit a 21st century neighborhood.

And Chris Koch, Executive Director of The Design Center, said:

The Design Center provided technical assistance and funding to this project to ensure the 10th Ward of Pittsburgh had a road map to support its redevelopment efforts. We were thrilled that evolveEA was selected through our Design Fund process as they were uniquely qualified to deliver an innovative, community-driven planning process that has already led to successfully implemented projects.

evolveEA collaborated on the project with Lawrenceville Corporation and Lawrenceville United, two community development organizations that have for years fostered neighborhood improvement throughout Lawrenceville’s three districts — Lower, Central, and Upper Lawrenceville. The project was supported by a grant from The Design Center of Pittsburgh. The project team also included Fourth Economy Consulting, based in Pittsburgh, who provided an economic analysis for the development strategy.